The 1994 Ice Hockey World Championships took place in Italy 25 April - 8 May. The games were played in Bolzano, Canazei and Milan.

Twelve teams took part, with the first round being split into two groups of six, with the four best teams from each group advancing to the quarter finals. This was the 58th World Championships, and Canada beat Finland in a shootout to capture gold for the first time since 1961. This was Canada's twentieth world title in ice hockey.

Great Britain returned to Group A for the first time since 1951, but failed to even earn a point. Slovakia, Belarus, Croatia, and Estonia all debuted in Group C, the Slovaks winning the top group, the Estonians winning the bottom group that would be called Group D in two years.[1][2]

Played in Copenhagen and Aalborg April 7-17. As in Group C1, a two to one score on the final day sealed victory over a former Soviet nation. This time Switzerland narrowly defeated Latvia.[1]

Played in Poprad and Spišská Nová Ves March 18-27. The hosts, shortly after losing in the quarterfinals of the Olympics, were expected to have a relatively easy time playing in Group C. However, all three former Soviet republics gave them very tough games, and prevailing by a single goal in the final game sealed their victory. North Korea was supposed to be the eighth team in this tournament, but did not participate.[1]

Played in November 1993. Two groups played to qualify for the final two spots in Spain.

Estonia was promoted to Group C1 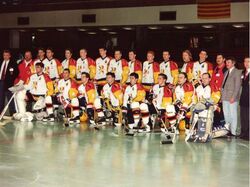 Belgium
Add a photo to this gallery

Retrieved from "https://icehockey.fandom.com/wiki/1994_Men%27s_World_Ice_Hockey_Championships?oldid=640700"
Community content is available under CC-BY-SA unless otherwise noted.