The 1994-95 ECHL season was the seventh season of the ECHL. Before the season started, the Huntsville Blast moved their operations from Huntsville, AL to Tallahassee, FL and became the Tallahassee Tiger Sharks and the Louisville IceHawks suspended operations. The Wheeling Thunderbirds finished first overall in the regular season and the Richmond Renegades won their first Riley Cup, defeating the Greensboro Monarchs four games to one. 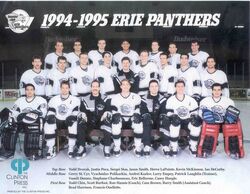 Erie Panthers
Add a photo to this gallery

Retrieved from "https://icehockey.fandom.com/wiki/1994-95_ECHL_season?oldid=403874"
Community content is available under CC-BY-SA unless otherwise noted.