On January 31, A combined WHL/QMJHL all-star team defeated the OHL all-stars 8–3 at Kitchener, Ontario before a crowd of 5,679. 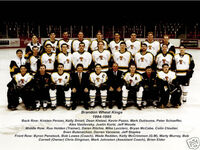