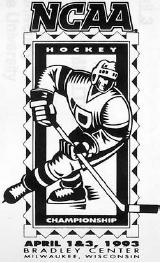 The 1993 Frozen Four was held April 1 and 3, 1993 in Milwaukee, Wisconsin at the Bradley Center. It was the first Frozen Four to take place in the state of Wisconsin.

Maine became the first Hockey East team to win a National Championship since the split with the ECAC in 1984, defeating the reigning champions Lake Superior 5-4. The victory capped a record-setting season as the Black Bears lost only one game all season long while becoming the first team to win 40 games.