The 1993–94 WHL season was the 28th season of the Western Hockey League. Sixteen teams completed a 72 game season. The Kamloops Blazers won the President's Cup, before going on to win the Memorial Cup.

On February 1, a combined WHL/OHL All-Star team defeated the QMJHL All-Stars 9–7 at Moncton, New Brunswick with a crowd of 6,380. 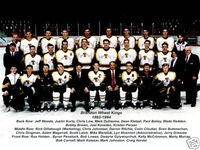 Retrieved from "https://icehockey.fandom.com/wiki/1993%E2%80%9394_WHL_season?oldid=385491"
Community content is available under CC-BY-SA unless otherwise noted.