The venue was the Méribel Ice Palace in Méribel, a ski resort about 45 km from host city Albertville.

Top four teams (shaded ones) advanced to the medal round.

Top four teams (shaded ones) advanced to the medal round.

Russian goaltender Nikolai Khabibulin was the third on the depth chart and never played when the Unified Team won gold in Albertville, France. Instead of giving the gold to someone who didn't play, coach Viktor Tikhonov kept it. Only players are given Olympic medals; coaches and management are not. The medal was finally returned to him in a private medal ceremony during the 2002 Winter Olympics in Salt Lake City, Utah 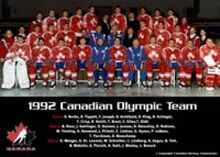