Ice Hockey Wiki
Register
Don't have an account?
Sign In
Advertisement
in: ECHL seasons, 1992 in hockey, 1993 in hockey

The 1992-93 ECHL season was the fifth season of the ECHL. In 1992, the league saw numerous changes in team membership. The Winston-Salem Thunderbirds move to Wheeling, WV, becoming the first franchise to make a major relocation, the Roanoke Valley Rebels announced that they were changing their name to the Roanoke Valley Rampage, and the Cincinnati Cyclones announced that they were moving to the International Hockey League and were being replaced with a franchise in Birmingham, AL. The 15 teams played 64 games in the schedule. The Wheeling Thunderbirds finished first overall in the regular season. The Toledo Storm won their first Riley Cup championship.

The ECHL announced a realignment of the two divisions in the light of recent changes in team membership. 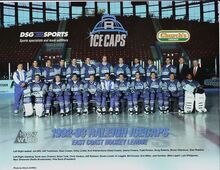 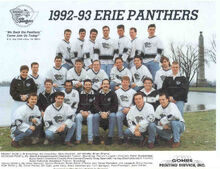 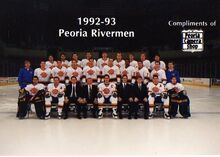