The Pittsburgh Penguins were the best team in the NHL during the 1992–93 regular season. Their 56 wins and 119 points earned them the President's Trophy's as the league's top team. Four players reached the 100-point plateau and, for the second consecutive season, five reached the 30-goal plateau. Despite missing over a quarter of the regular season, Mario Lemieux returned later in the year to help the Penguins put together a 17-game winning streak, an NHL record still standing today. 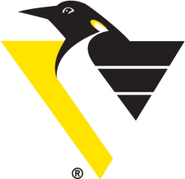 New Logo
Add a photo to this gallery

It was announced during the regular season that Mario Lemieux had been diagnosed with Hodgkin's Disease. Despite missing 24 regular-season games and the 1993 NHL All-Star Game in Montreal on Saturday, February 6, Lemieux led the league in Plus/Minus with +55 and led in scoring with 160 points (a total for which he would win the Art Ross Trophy). At the pace he was scoring goals (1.15 per game) and picking up assists (1.52 per game), he would have scored 97 goals and tallied 128 assists for 225 points had he played all 84 games. Had he achieved these totals, he would have broken Wayne Gretzky's all-time records for most goals in a season (92) and most points in a season (215). In recognition of his dedication and his achievements, Lemieux was awarded the Hart Trophy as league MVP of 1992–93.

† Game was played in Atlanta.

‡ Game was played in Cleveland.

The Devils had been a struggling team prior to the 1992–93 season, and in the first round of the playoffs, they met the Presidents' Trophy winners from Pittsburgh. The Penguins entered the series on an 11-game playoff winning streak, which they extended to a record 14 games in this series.

The Isles' improbable upset of the Penguins was capped off by David Volek's series-winning goal at 5:16 of overtime in Game 7.

The Penguins were involved in the following transactions during the 1992-93 season:

The Cleveland Lumberjacks relocated from Muskegon for the 1992-93 season. They finished second in the IHL's Atlantic Division which earned them a playoff spot. They lost in the first round of the playoffs to the eventual Turner Cup champion Fort Wayne Komets.

Retrieved from "https://icehockey.fandom.com/wiki/1992%E2%80%9393_Pittsburgh_Penguins_season?oldid=126959"
Community content is available under CC-BY-SA unless otherwise noted.