The 1991 Canada Cup was a professional international ice hockey tournament played in September 1991. The finals took place in Montreal on September 14 and Hamilton, Ontario on September 16, and were won by Canada. The Canadians defeated the USA in a two game sweep, to win the fifth and final Canada Cup. The tournament would be replaced by the World Cup of Hockey in 1996.

Of the five Canada Cup tournaments, this is the only one in which a team went undefeated. Canada compiled a record of six wins and two ties in eight games. The first tie was a stunning 2-2 result with underdog Finland on the opening day of the tournament, who got spectacular goaltending from Markus Ketterer. Finland surprised many by finishing in third place in the round robin; the first time they had ever qualified for the semi-finals in the history of the Canada Cup. The Americans were also very strong, as they iced their best international line-up to date. They went a perfect 5-0 against European competition in the tournament, while losing three times to Canada. The team representing the USSR was relatively weak compared to past tournaments, due to severe political turmoil at home and many players declining to play for the team. It was not known until weeks before the start of the tournament that they would even send a team. This was the final major senior event in which a team representing the USSR would play.

Game 1 of the final is best remembered for the vicious check from behind on Wayne Gretzky by American defenseman Gary Suter, which knocked the Canadian captain out of the tournament and forced him to miss the first month of the NHL season. Game 2 was tied until late in the third period when Steve Larmer scored the tournament winner on a short-handed breakaway. 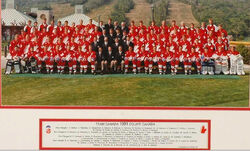 Canada
Add a photo to this gallery
Retrieved from "https://icehockey.fandom.com/wiki/1991_Canada_Cup?oldid=405318"
Community content is available under CC-BY-SA unless otherwise noted.