The 1991–92 WHL season was the 26th season of the Western Hockey League. Fifteen teams completed a 72 game season. The Kamloops Blazers won the President's Cup before going on to win the Memorial Cup.

On February 5, the WHL All-Stars defeated a combined QMJHL/OHL All-Star team 5–4 in double overtime at Saskatoon, Saskatchewan with a crowd of 4,519. 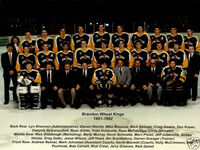