The 1990 Frozen Four was held March 30 and April 1, 1990 in Detroit, Michigan at Joe Louis Arena. It was the first Frozen Four to establish both semifinal games taking part on the same day, with a rest day before the championship game. The third place game was eliminated for the first time since the very first Frozen Four in 1948.

Wisconsin won its fifth national championship, defeating the Colgate Raiders - who were playing in their very first Frozen Four - by a convincing 7-3 tally. 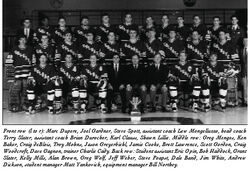