The 1990–91 Chicago Blackhawks season was the Hawks' 65th season. The Hawks finished 1st in the Norris Division and lost in the Division Semi-finals to the Minnesota North Stars 4 games to 2. 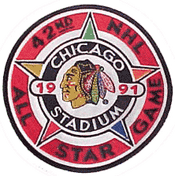 After reaching the Conference finals the prior two years and winning the Presidents' Trophy, hopes were extremely high entering the playoffs. The first round again reunited the Hawks with their old rivals from Minnesota who the Blackhawks needed seven games to dispatch in the prior year when the North Stars were the last place team in the division. This series however would not last seven games. The teams needed overtime to determine the winner of Game 1 at the Chicago Stadium, however it was Minnesota who emerged as the 4–3 winner. The Blackhawks won Games 2 and 3, an easy 5–2 win in Chicago, and a close 6–5 win in Minnesota. However the North Stars swept the remaining games in blowout fashion including a 6–0 shutout on the Hawks home ice in Game 5. What was looking like it could be one of the greatest seasons in Hawks history was suddenly over. Minnesota won their next two series and reached the Stanley Cup where they lost to Mario Lemieux and the Pittsburgh Penguins.

Retrieved from "https://icehockey.fandom.com/wiki/1990%E2%80%9391_Chicago_Blackhawks_season?oldid=698164"
Community content is available under CC-BY-SA unless otherwise noted.