The 1989-90 ECHL season was the 2nd season of the ECHL. The league brought back all five teams from the inaugural season and added three more franchises in Greensboro, North Carolina, Nashville, Tennessee, and Norfolk, Virginia. Before the season began, the Carolina Thunderbirds changed their name to the Winston-Salem Thunderbirds. The 8 teams played 60 each in the schedule. The Winston-Salem Thunderbirds finished first overall in the regular season. The Greensboro Monarchs won their first Riley Cup championship. 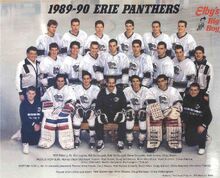 Erie Panthers
Add a photo to this gallery

Retrieved from "https://icehockey.fandom.com/wiki/1989-90_ECHL_season?oldid=259647"
Community content is available under CC-BY-SA unless otherwise noted.