This is the 1988 tournament for the University Cup, the CIAU Canadian university championship. It was held at the Varsity Arena in Toronto, Ontario. This was the season the format reverted to a 4-team single knockout format. The format remained until 1997. The QUAA folded their hockey conference following the 1987 season and their teams joined the OUAA. Instead of discontinuing their berth, the CIS granted it to the OUAA finalist. 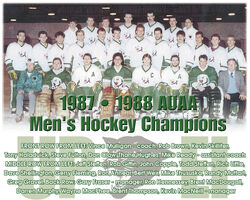 University of Prince Edward Island
Add a photo to this gallery

Retrieved from "https://icehockey.fandom.com/wiki/1988_University_Cup?oldid=547127"
Community content is available under CC-BY-SA unless otherwise noted.