The 1988 Memorial Cup occurred May 7-May 14 at the Colisée de Chicoutimi in Chicoutimi, Quebec. Participating teams were the Quebec Major Junior Hockey League champion Hull Olympiques, the QMJHL runner-up, the Drummondville Voltigeurs, as well as the winners of the Western Hockey League and Ontario Hockey League which were the Medicine Hat Tigers and Windsor Spitfires. The original host team, the Chicoutimi Saguenéens, did not participate as they did not make it far enough in the QMJHL playoffs. Although the Spitfires entered the Cup final having won 39 of the previous 40 games they had played, Medicine Hat won their second Memorial Cup in a row, defeating Windsor in the final game. 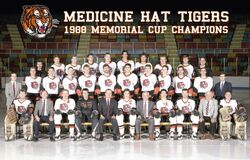