The 1988–89 WHL season was the 23rd season for the Western Hockey League. Fourteen teams completed a 72 game season. The Swift Current Broncos won the President's Cup before going on to win the Memorial Cup.

On January 24, the West Division defeated the East Division 5–1 at Brandon, Manitoba with a crowd of 2,933. 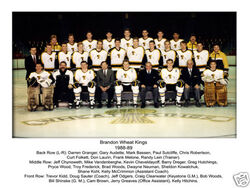