The 1986 Memorial Cup occurred May 10-May 17 at the Memorial Coliseum in Portland, Oregon. Hosting rights were originally awarded to the Queen's Park Arena and the New Westminster Bruins, but staging the tournament alongside Expo '86 in Vancouver proved logistically impossible and so the tournament was moved to Portland for the second time in three years. Participating teams were the host team Portland Winter Hawks, as well as the winners of the Western Hockey League, Ontario Hockey League and Quebec Major Junior Hockey League which were the Kamloops Blazers, Guelph Platers and Hull Olympiques. The Platers won their first Memorial Cup, and the city's second Memorial Cup, defeating Hull in the final game. 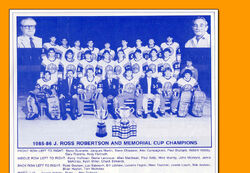 Guelph Platers
Add a photo to this gallery

Retrieved from "https://icehockey.fandom.com/wiki/1986_Memorial_Cup?oldid=614596"
Community content is available under CC-BY-SA unless otherwise noted.