The 1986–87 AHL season was the 51st season of the American Hockey League. Thirteen teams played 80 games each in the schedule. The league institutes awarding one point in the standings, for an overtime loss. The league experimented with a shootout to settle games tied after a scoreless overtime period; the format would not be used again until the 2004–05 season. 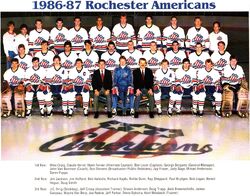