The 1985 tournament was a round robin format, with the top three teams winning gold, silver and bronze medals respectively.

Poland was relegated to Pool B for 1986. 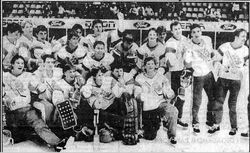