The 1985–86 WHL season was the 20th season of the Western Hockey League. Fourteen teams completed a 72 game season. The Kamloops Blazers won the President's Cup.

The East division played a round robin format amongst the top six teams:

On January 20, the Portland Winter Hawks defeated the West All-Stars 4–3 in Portland, Oregon with a crowd of 3,106.

On January 21, the East All-Stars defeated the Prince Albert Raiders 6–3 in Prince Albert, Saskatchewan before a crowd of 1,475. 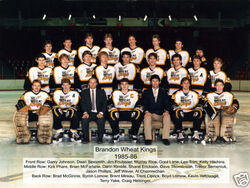