The 1984 Canada Cup was a professional international ice hockey tournament played during the first three weeks of September 1984. The best-of-three final took place between Canada and Sweden, with Canada winning two games to nil. Canadian forward John Tonelli was named the tournament's most valuable player.

This was the only Canada Cup to feature a team from West Germany, who managed a single point in five games based on a 4-4 tie with Czechoslovakia. This was also the only point for the Czechoslovaks, whose lineup had been decimated by recent defections. One of these defections was Slovak star Peter Stastny, who was playing for Canada at this event. The Canadian team was a disappointing 2-2-1 in the round-robin. There was inner turmoil on the roster, which was dominated by players by two NHL powerhouses, the Edmonton Oilers and the New York Islanders--these two teams had faced off in the past two Stanley Cup Finals, and there were bitter feuds between players that had to be overcome. In one semifinal, fourth place Canada faced first-place USSR, who were a perfect 5-0 in the round-robin. Canada dominated the first two periods, but managed only a 1-0 lead due to spectacular goaltending from Vladimir Myshkin. The Soviets scored twice in the third to take the lead, but defenseman Doug Wilson tied the game late in regulation. In overtime, Myshkin continued his brilliant play. The Soviets got a two-on one against the flow of the play, but were thwarted by a brilliant poke-check by Paul Coffey, who was normally an offensive defenseman. Later on that play, Coffey's point shot was deflected in front of the net by Mike Bossy for the winning goal. In the other semi-final, Sweden scored on its first four shots on goal and cruised to a stunning 9-2 victory over the USA. The Americans had beaten Sweden 7-1 in the round robin and had looked very impressive prior to collapsing in this game.

Canada won Game 1 of the final 5-2. In Game 2, they built up a commanding 5-0 lead in the first period before Sweden mounted a comeback that fell just short. The final score was 6-5. 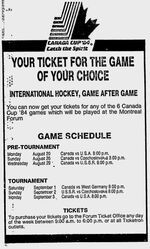