The 1983–84 Edmonton Oilers season was the Oilers' 5th season in the NHL. After an outstanding regular season, the Oilers won their first Stanley Cup.

It was another record breaking season for the club. The Oilers would set club records in wins (57) and points (118), as they won the Smythe Division for the 3rd straight season. Edmonton would break the NHL record for goals in a season, previously set by the Oilers the previous season, by scoring 446 times.

On Sunday, February 12, 1984, the Oilers lost on the road, 11–0, to the Hartford Whalers. It was the first time in 230 consecutive regular-season games that the Oilers were shut out; the last time Edmonton had been shut out was on Thursday, March 12, 1981, when they lost at home, 5–0, to the New York Islanders.

Wayne Gretzky would break the 200 point barrier for the 2nd time in his career, as he won the Art Ross Trophy for the 4th straight year with 205 points. Gretzky scored an NHL high 87 goals and 118 assists. Paul Coffey would put up 126 points, the 2nd highest point total ever by a defenceman, while Jari Kurri (113) and Mark Messier (101) would each break the 100 point mark for the club. Glenn Anderson would have a solid season, getting 54 goals, behind only Gretzky, and just miss the 100—point club as he finished with 99.

Grant Fuhr would lead the club with 30 victories, while Andy Moog would put up a team best GAA of 3.77.

In the playoffs, the Oilers would make short work of the Winnipeg Jets, sweeping them in 3 games, and then face their Battle of Alberta rivals, the Calgary Flames for the Smythe Division finals. The Flames would push the Oilers to 7 games before Edmonton would defeat them for the 2nd straight year. The Oilers would sweep the Minnesota North Stars in the Campbell Conference final, setting up a Stanley Cup rematch against the New York Islanders. The Islanders, who swept the Oilers the previous year, were looking to win their 5th straight Stanley Cup, however, Edmonton had other plans, and after the teams split the first 2 games in New York, the Oilers would win 3 in a row to win the series in 5 games, and win their first Stanley Cup, becoming the first team from the WHA to win the cup. Mark Messier won the Conn Smythe Trophy as the playoff MVP. 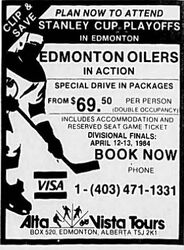