The 1981 Memorial Cup occurred May 3-May 15 at the Windsor Arena in Windsor, Ontario. Participating teams were the winners of the Ontario Hockey League, Quebec Major Junior Hockey League and Western Hockey League which were the Kitchener Rangers, Cornwall Royals and Victoria Cougars. Cornwall won their second Memorial Cup in a row and third overall, defeating Kitchener in the final game. 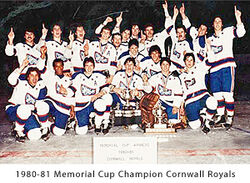 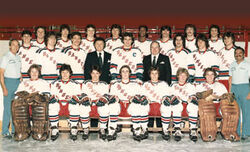 Kitchener Rangers
Add a photo to this gallery

Retrieved from "https://icehockey.fandom.com/wiki/1981_Memorial_Cup?oldid=614621"
Community content is available under CC-BY-SA unless otherwise noted.