Wisconsin won its third national title, defeating Minnesota 6-3 in the championship game. For the first time, all four teams were from the West. This was also the first time three teams from the same conference advanced to the Frozen Four, with only Northern Michigan not from the WCHA. 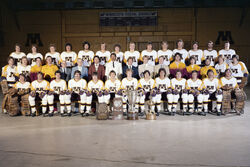