Ice Hockey Wiki
Register
Don't have an account?
Sign In
Advertisement
in: 1981 in hockey, 1982 in hockey, Vancouver Canucks seasons

The 1981–82 Vancouver Canucks season was the team's 12th in the NHL. The Canucks finished 2nd in the Smythe Division and made their first appearance in the Stanley Cup Finals, losing in the 1982 Stanley Cup Finals to the New York Islanders 4 games to 0.

†Denotes player spent time with another team before joining Vancouver. Stats reflect time with the Canucks only.

*Denotes player traded by Vancouver midway through the season. Stats reflect time with Canucks only.

Records Achieved in the Season[]

Records Achieved in the Playoffs[]

The Canucks were involved in the following transactions during the 1981-82 season.

Vancouver's picks at the 1981 NHL Entry Draft.[1] The draft was held at the Montreal Forum in Montreal, Quebec.

Harold Snepsts and Stan Smyl with the Clarence Campbell Trophy, May 9, 1982. 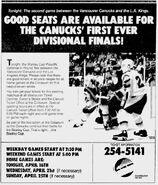