Ice Hockey Wiki
Register
Don't have an account?
Sign In
Advertisement
in: Calgary Flames seasons, 1981 in hockey, 1982 in hockey

The 1981–82 Calgary Flames season was the second season in Calgary and tenth for the Flames franchise in the National Hockey League. The Flames finished 3rd in the Smythe Division and lost in the Division Semi-finals to the Vancouver Canucks 3 games to 0.

The follow-up to the Flames first season in Calgary proved to be disappointing on the ice. 29 wins represented the Flames lowest total since the franchise's inaugural season in Atlanta.[1] Despite the poor record, Calgary finished in third place in the newly organized Smythe Division, earning a playoff match-up against the Vancouver Canucks. The Flames returned to their Atlanta form, being swept out of the post-season in three straight games, as the Canucks began their run to the Stanley Cup Finals.

The 1981–82 season saw the Flames acquire Lanny McDonald from the Colorado Rockies, bringing the Hanna, Alberta product home. Sporting his trademark moustache, McDonald would spend his final seven seasons with the Flames, and remains an icon in Calgary. McDonald would score 34 of his 40 goals that season in a Flames uniform.

Pekka Rautakallio was the Flames representative at the 1982 All-Star Game.[2]

†Denotes player spent time with another team before joining Calgary. Stats reflect time with the Flames only.
‡Traded mid-season.

The Flames were involved in the following transactions during the 1981–82 season. 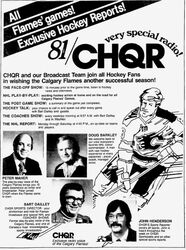