The 1980 Memorial Cup is remembered as one of the most controversial in the tournament's history. Going into the final game of the round-robin, Peterborough had clinched first place overall, and with a win over Cornwall, would have faced Regina in the Cup final. Many in Saskatchewan believed that the Petes deliberately threw the final game of the round-robin in order to face the Royals again in the final, a team that was perceived as weaker. Boos rained down upon the Petes after the Royals won the game and clinched their berth in the Cup final. However, the allegations were never proven, and if they were true, it didn't work, as Peterborough was defeated in the final by the same Royals. 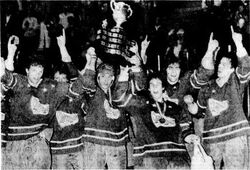 Royals' captain Dan Daoust raises the cup with his teamates.