The Centennial Cup 1980 is the Tier II Junior "A" 1980 ice hockey National Championship for the Canadian Junior A Hockey League.

The Centennial Cup was competed for by the winners of the Abbott Cup, Dudley Hewitt Cup, and the Callaghan Cup.

The tournament was hosted by the North York Rangers in the city of North York, Ontario. 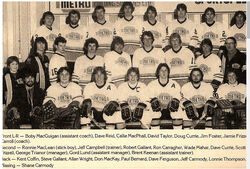 Red Deer Rustlers
Add a photo to this gallery

Retrieved from "https://icehockey.fandom.com/wiki/1980_Centennial_Cup?oldid=461574"
Community content is available under CC-BY-SA unless otherwise noted.