The 1980 Allan Cup was the Canadian national senior ice hockey championship for the 1979-80 Senior "A" season. The event was hosted by the Spokane Flyers in Spokane, Washington. The 1980 playoff marked the 72nd time that the Allan Cup has been awarded.

The 1980 Allan Cup was the fourth Allan Cup championship to be hosted by an American city.

Spokane beat Cambridge 4 wins to none. 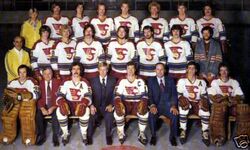 Retrieved from "https://icehockey.fandom.com/wiki/1980_Allan_Cup?oldid=603469"
Community content is available under CC-BY-SA unless otherwise noted.