The 1979–80 Winnipeg Jets season was their 8th season and 1st in the National Hockey League. The Jets finished 5th in the Smythe Division and did not qualify for the playoffs.

Reclaiming of Players: The 17 existing NHL teams were allowed to reclaim any rights to former WHA players they held. The four incoming franchises, however, were allowed to protect up to two goaltenders and two skaters, voiding their NHL rights. These players were considered "priority selections" in the expansion draft. Gordie Howe was one of two special cases (the other being Wayne Gretzky), as a gentlemen's agreement between the Hartford Whalers and the Detroit Red Wings, which held his rights, led to the Wings declining to reclaim Howe.

These are Winnipeg players whose NHL rights were reclaimed when the WHA merged with the NHL. This list is incomplete. 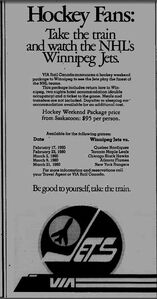 Ad in Saskatoon for a train trip and game. 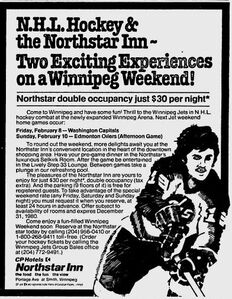 Retrieved from "https://icehockey.fandom.com/wiki/1979%E2%80%9380_Winnipeg_Jets_season?oldid=694570"
Community content is available under CC-BY-SA unless otherwise noted.