The 1979–80 Boston Bruins season was the Bruins' 56th season. In the first round of the NHL Draft, the Bruins drafted Ray Bourque. The Bruins had two different coaches during the season. Fred Creighton had a record of 40 wins, 20 losses and 13 ties, while Harry Sinden had 6 wins and 1 loss.

Boston's picks at the 1980 NHL Entry Draft were as follows: 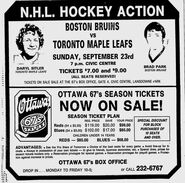