The 1978 World Junior Ice Hockey Championships (1978 WJHC) was the 2nd edition World Junior Ice Hockey Championships and was held from December 22, 1977 until January 3, 1978. The tournament was held in Canada, mainly in Montreal and Quebec City. The Soviet Union won its second consecutive gold medal, while Sweden won the silver, and Canada the bronze.

Switzerland was relegated to Pool B for 1979. 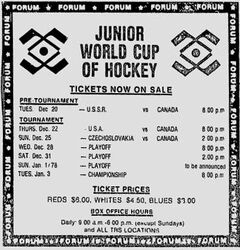 Retrieved from "https://icehockey.fandom.com/wiki/1978_World_Junior_Championship?oldid=405319"
Community content is available under CC-BY-SA unless otherwise noted.