In a matchup between two Beanpot arch-rivals, the Boston University Terriers defeated Boston College 5-3 to win their third national title. In doing so, the Terriers became the first team to win the NCAA title after qualifying for the Frozen Four through an NCAA "play-in" game.

Defenseman Jack O'Callahan, who would later play for the 1980 US Olympic Team, was named the tournament's Most Outstanding Player. 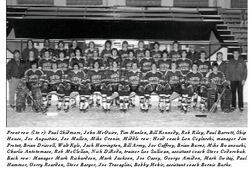 Boston College
Add a photo to this gallery

This entry is a stub. You can help the Ice Hockey Wiki by expanding it. Click the "edit" button to add information.
Retrieved from "https://icehockey.fandom.com/wiki/1978_Frozen_Four?oldid=405039"
Community content is available under CC-BY-SA unless otherwise noted.