Ice Hockey Wiki
Register
Don't have an account?
Sign In
Advertisement
in: 1978 in hockey, 1979 in hockey, World Hockey Association

The 1978–79 WHA season was the 7th and final season of the World Hockey Association (WHA). Prior to the start of the season, the Houston Aeros folded leaving seven teams to start the season. Only six finished however, as the Indianapolis Racers folded after 25 games on the December 15, 1978. The remaining six teams each played 80 games, including one game each per team against a Soviet All-Star squad and the Czechoslovakia National team, the second consecutive year for this arrangement. The Soviet team won four of their six games and tied another; the Czech team only won once and tied once against four losses. In addition, to allow each regular team to play 80 games, the Edmonton Oilers played the Finnish National team (with future Oiler Jari Kurri) once at home, winning by a score of 8-4.

The Winnipeg Jets and defeated the Edmonton Oilers 4 games to 2 in the Finals to win their 3rd Avco World Trophy.

After the end of the season, an agreement was reached whereby four of the teams, the Edmonton Oilers, Quebec Nordiques, Winnipeg Jets and New England Whalers were admitted to the National Hockey League (NHL) as expansion teams for the 1979–80 NHL season, and the WHA ceased operations. The Cincinnati and Birmingham franchises were paid to disband.

The dying WHA went to almost any length to try and stay afloat. The NHL had rules regarding the age of players that could play while the WHA didn't. Nelson Skalbania, the owner of Indianapolis Racers, signed the 17 year old future super-star, Wayne Gretzky to, at that time, a whopping personal contract worth between 1.125 and 1.75 million dollars over 4 to 7 years. Skalbania, knowing that the WHA was fading, felt owning the young star was more valuable than owning a WHA team. Eight games into the season, though, Skalbania needed cash and liquidated his greatest asset to his old friend and former partner, Peter Pocklington, owner of the Edmonton Oilers. Pocklington purchased Gretzky and two other Indianapolis players, goaltender Eddie Mio and forward Peter Driscoll paying $700,000 for the contracts of the three players, although the announced price was actually $850,000. On Gretzky's 18th birthday, (January 26, 1979), Pocklington signed him to a 21 year personal services contract worth between 4 and 5 million dollars, the longest in hockey history. Gretzky captured the Lou Kaplan Trophy for rookie of the year, finish third in league scoring, and help the Oilers to first overall in the league.

Wayne Gretzky appeared in the 1979 WHA All-Star Game. The format of the game was a three game series between the WHA All-Stars against Dynamo Moscow at Edmonton's Northlands Coliseum. The WHA All-Stars were coached by Jacques Demers and Demers asked Gordie Howe if it was okay to put him on a line with Wayne Gretzky and his son Mark Howe. In the first game, the line scored seven points, as the WHA All-Star won by a score of 4-2. In the second game, Gretzky and Mark Howe each scored a goal and Gordie Howe picked up an assist as the WHA won 4-2. The line did not score in the final game but the WHA won by a score of 4-3.

The Oilers' Dave Semenko scored late in the third period of the deciding game, to record the last goal in the history of the WHA.[1] The goal was given up by the Winnipeg Jets Gary Smith. 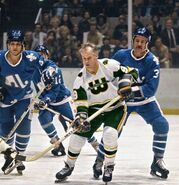 1 Four of the WHA teams were admitted to the NHL as expansion franchises — the New England/Hartford Whalers, Quebec Nordiques, Edmonton Oilers and Winnipeg Jets.