The 1978–79 Edmonton Oilers season was the Oilers' 7th and final season in the World Hockey Association (WHA). The Oilers finished 1st in the league and lost to the Winnipeg Jets in the Avco World Trophy Finals 4 games to 2.

Nelson Skalbania, the owner of Indianapolis Racers, signed the 17 year old future super-star, Wayne Gretzky to, at that time, a whopping personal contract worth between 1.125 and 1.75 million dollars over 4 to 7 years. Skalbania, knowing that the WHA was fading, felt owning the young star was more valuable than owning a WHA team. Eight games into the season, though, Skalbania needed cash and liquidated his greatest asset to his old friend and former partner, Peter Pocklington, owner of the Oilers. Pocklington purchased Gretzky and two other Indianapolis players, goaltender Eddie Mio and forward Peter Driscoll paying $700,000 for the contracts of the three players, although the announced price was actually $850,000. On Gretzky's 18th birthday, (January 26, 1979), Pocklington signed him to a 21 year personal services contract worth between 4 and 5 million dollars, the longest in hockey history. Gretzky captured the Lou Kaplan Trophy for rookie of the year, finish third in league scoring, and help the Oilers to first overall in the league. 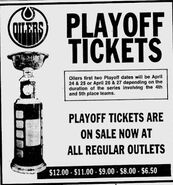 Retrieved from "https://icehockey.fandom.com/wiki/1978–79_Edmonton_Oilers_season?oldid=720550"
Community content is available under CC-BY-SA unless otherwise noted.