The 1977 Ice Hockey World Championships took place in Vienna, Austria from 21st April to 8th May. Eight teams took part, first playing each other once, then the four best teams advancing to a new round. The tournament was also the 55th ice hockey European Championship. 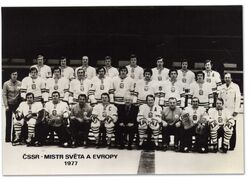 Czechoslovakia
Add a photo to this gallery
Retrieved from "https://icehockey.fandom.com/wiki/1977_World_Championship?oldid=307941"
Community content is available under CC-BY-SA unless otherwise noted.