The 1977-78 WHA season was the sixth season of the now defunct World Hockey Association (WHA). Eight teams played 80 games each. The Avco World Trophy winner was the Winnipeg Jets.

With a reduction of 3 teams from the end of the previous season (the San Diego Mariners, Phoenix Roadrunners, and Calgary Cowboys folded), the WHA abandoned its divisional format and grouped the remaining 8 teams together. There had been a tentative merger agreement that would have had Cincinnati, Houston, New England, Winnipeg, Quebec, and Edmonton join the NHL but it could not be finalized.

In a unique move, two international All-Star teams, the Soviet All-Stars and Czechoslovakia All-Stars, played games that counted in the regular season standings. They played each WHA team once, on the WHA team's home ice of course. The Soviet team acquitted themselves well, winning three, tying one and losing the other four, plus winning two exhibition games also; while the Czecho team only won once and tied once, losing six. This is the first time International teams competed in regular season competition in a major professional sports league in North America; those two teams as well as a Finnish team would come back to play the WHA teams the next year.

The best six teams qualified for the playoffs. However, instead of the standard schedule for a six-team playoff (i.e., giving the 1st and 2nd place teams byes into the semifinals, with the 3rd, 4th, 5th, and 6th place teams opening in the quarterfinals), the WHA came up with a unique twist. There were three quarterfinal series instead of two, with the teams paired top to bottom (i.e., 1st vs. 6th, 2nd vs. 5th, 3rd vs. 4th). The highest-seeded quarterfinal winner then received a semifinal bye and advanced directly to the finals, while the remaining two quarterfinal series winners played off in a single semifinal. All series were best four-out-of-seven games. 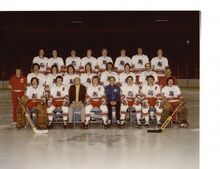 Birmingham Bulls
Add a photo to this gallery

Retrieved from "https://icehockey.fandom.com/wiki/1977-78_WHA_Season?oldid=259945"
Community content is available under CC-BY-SA unless otherwise noted.