These are the playoffs for the 1975-76 University Cup, the CIAU Canadian university championship. This format lasted only one season and was abandoned due to ridiculousness. There were still five conferences in Canada. There was a "final four" tournament in Toronto and the U of T qualified automatically as hosts. This marked the first time the host was given an automatic berth, a tradition which continues to this day. The OUA champion qualified automatically because somebody had to. The GPAC and CWUAA champions and runners-up played in a western regional tournament. Similarly the QUAA and AUS winners and runners-up played an eastern regional tournament. The regional tournament winners qualified for the final four, along with the OUA winners and host. This is where it got weird. In the national tournament the winners and losers on opening day all advanced to the sudden-death semi-finals. Really.

Guelph and Toronto had byes to national tournament. 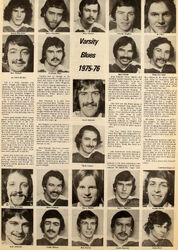 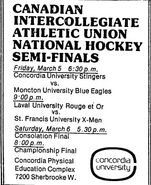 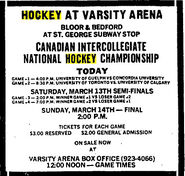