For the third year in a row, the Minnesota Golden Gophers met the Michigan Tech Huskies in the championship game. Minnesota regained the title, its second, defeating MTU 6-4.

The 1976 edition of the Frozen Four was the only one, as of 2005, that did not include an All-Tournament team. Minnesota forward Tom Vannelli was named the tournament's Most Outstanding Player. 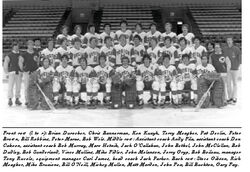