The 1976–77 St. Louis Blues season was the 10th in franchise history. The Blues won the Smythe Division title with a record of 32 wins, 39 losses and nine ties, good for 73 points, and received a first-round bye in the 1977 NHL Playoffs. However, the Blues were no match for the eventual Stanley Cup champion Montreal Canadiens, as they swept the Blues in the Quarter-finals. 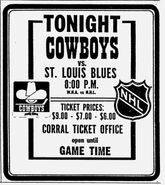 Retrieved from "https://icehockey.fandom.com/wiki/1976%E2%80%9377_St._Louis_Blues_season?oldid=692966"
Community content is available under CC-BY-SA unless otherwise noted.