For the second straight year, the participants were:

Michigan Tech avenged its loss to Minnesota in the 1974 Frozen Four championship game, defeating the Golden Gophers 6-1. It was the Huskies' third national championship, and as of 2005, their last. 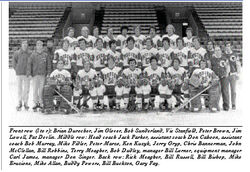