These are the 1974 playoffs for the University Cup, the CIAU Canadian university championship. There was no tournament. There were regional quarter-final and semi-final series followed by a sudden-death final played in Toronto, Ontario. The format remained in place through 1975. Only teams from the GPAC and the CWUAA ever played in the quarter-final round. 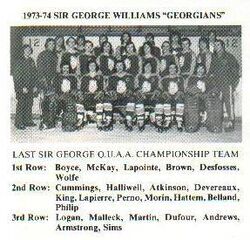 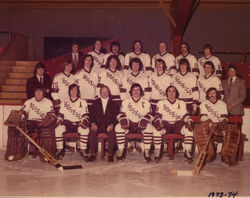 St. Mary's University
Add a photo to this gallery

Retrieved from "https://icehockey.fandom.com/wiki/1974_University_Cup?oldid=547115"
Community content is available under CC-BY-SA unless otherwise noted.