The 1973–74 Toronto Toros season was the team's 2nd season in Toronto after their inaugural season as the Ottawa Nationals in 1972-73. The Toros finished 2nd in the Canadian Division and lost in the Quarter-finals to the San Diego Mariners 4 games to 3.

The Toros strengthened themselves in the off-season with the signing two ex-Toronto Maple Leafs, former NHL superstar Frank Mahovlich and the hero from the 1972 Summit Series, Paul Henderson. Czech star Vaclav Nedomansky defected and signed with Toronto.

The Toros moved from Varsity Arena to Maple Leaf Gardens for the start of their second season. However, Harold Ballard had regained control of the Gardens. A violent opponent of the WHA, he never forgave the upstart league for nearly decimating the Leafs' roster in the early 1970s, he deliberately made the Toros' lease terms at the Gardens as onerous as possible. Besides making them pay $15,000 per game, the arena was dim for the first game. It was then that Ballard demanded $3,500 for use of the lights. Ballard also denied the Toros access to the Leafs' locker room, forcing them to build their own at a cost of $55,000. He also removed the cushions from the home bench for Toros' games (he told an arena worker, "Let 'em buy their own cushions!").

The Toros jerseys were the same design as in the 1973-74 season.

On October 6, 1974, the Toros lost an exhibition game 5-3 against the Minnesota North Stars.

Tom Simpson became the first professional hockey player in Toronto to have a 50-goal season, scoring 52 goals (a number he would never come close to matching again). The Toros finished the year with the league's fifth-best record at 43-33-2.

During the intermission of the March 25, 1975 game versus the Vancouver Blazers, a breakaway exhibition was held between daredevil Evel Knievel and Toros goaltender Les Binkley. Wearing a Toros #13 jersey, Knievel (who had played semi-pro hockey in Montana) deked Binkley out and scored. 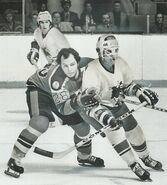 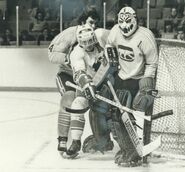 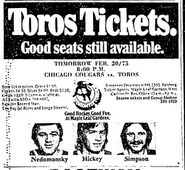 Retrieved from "https://icehockey.fandom.com/wiki/1974–75_Toronto_Toros_season?oldid=720829"
Community content is available under CC-BY-SA unless otherwise noted.