The 1973 World Ice Hockey Championships were the 40th Ice Hockey World Championships and the 51st European Championships of ice hockey. The tournament took place in the Soviet Union from 31 March to 15 April and the games were played at the Palace of Sports of the Central Lenin Stadium in the capital, Moscow. Six teams took part in the main tournament, with each team playing each other twice. The Soviet Union took back their world title, winning all ten games on home ice, with an incredible points difference, and becoming World Champions for the twelfth time.

West Germany was relegated to Group B.

East Germany was promoted to Group A, both Switzerland and Italy were relegated to group C. Rating Austria, Japan and Switzerland against each other head to head, they each had two points, Austria had a goal differential of +2, Japan +1, and Switzerland -2.

Played in Nimègue, Utrecht, Tilburg and The Hague, from March 9th to the 18th.

Norway and the Netherlands were promoted to Group B. 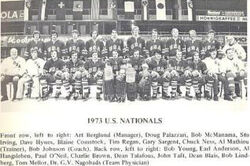