The 1973–74 Toronto Maple Leafs season was the fifty-seventh season of the Toronto NHL franchise, forty-seventh as the Maple Leafs. The Leafs finished 4th in the East Division and lost in the Quarter-finals to the Boston Bruins 4 games to 0.

The Maple Leafs made several signings that would improve their team. At the entry draft, the Maple Leafs chose Lanny McDonald with the fourth-overall draft pick. He would play six and a half seasons with the Maple Leafs. Bernie Parent, who had left the team for the World Hockey Association (WHA) in 1972, made it known that he wanted to return to the NHL. The Maple Leafs still had his NHL rights, and they traded Parent to the Philadelphia Flyers for Doug Favell and a first-round draft pick, which the Maple Leafs used to choose Bob Neely. Neely would play four seasons for the Maple Leafs before being traded to the Colorado Rockies.

In a first for Toronto, the club signed players from Europe. Toronto signed Swedish defenceman Borje Salming and forward Inge Hammarstrom. Salming had made the all-star team at the 1973 world championships. Hammarstrom was one of the top scorers in Sweden. Both had played for Brynas of the Swedish league, and the Leafs had to pay the Swedish Ice Hockey Federation for their release.[1] Salming would play with the Leafs until 1989, when he joined the Detroit Red Wings. Hammarstrom would play five seasons in Toronto before moving to the St. Louis Blues.

The Bruins and Leafs last met in the 1972 Quarter-finals where the Bruins won the series in five games. Although Phil Esposito was held to one goal in the series by the checking of Dave Keon, the Bruins second line of Gregg Sheppard, John Bucyk and Bobby Schmautz dominated with Sheppard scoring four goals and Schmautz adding six points. Gilles Gilbert played every minute of the series in goal for the Bruins while Doug Favell played in Games 1, 2 and 4. Gilbert recorded a shutout and held Toronto to ten goals in the series.


Game 1 at the Boston Garden was the tightest match of the series. The Leafs outshot the Bruins 35-33 and there were only three power plays in the game. After a scoreless first period, where Toronto had the edge in play, Gregg Sheppard scored the only goal of the game 4:12 into the second period, assisted by Dallas Smith and Don Marcotte. Boston took over the game in the third period, outshooting Toronto and held on for a 1-0 victory.

Game 2 at Boston saw the teams trade goals in the first period with Ken Hodge, Ron Ellis, Bobby Schmautz and Dave Keon scoring. In the second period, Schmautz set up goals by John Bucyk and Wayne Cashman before Darryl Sittler cut the Bruins lead to 4-3. The Leafs pressed in the third period and outshot the Bruins 16-6. However, Phil Esposito scored on Boston's only power play of the period and Gregg Sheppard added an empty net goal for a 6-3 Bruins victory and a 2-0 lead in the series.

Game 3 at Maple Leaf Gardens saw former Bruin Eddie Johnston in goal for the Leafs. Toronto started the game strong and after several co-incidental minor penalties, Bob Neely scored the only goal of the period. However, Boston broke the game open in the second period with André Savard scoring his first career NHL playoff goal, followed by a pair by Sheppard and John Bucyk's second goal of the series. Neely set up Darryl Sittler with 30 second left to trim Boston's lead to 4-2 heading into the third period. Wayne Cashman scored a little over a minute into the period answered a minute later by Eddie Shack, with the last playoff goal of his career. Despite pouring 24 shots on Gilles Gilbert, the Leafs couldn't muster another goal and Bobby Schmautz sealed Boston's 6-3 victory with Gilbert stopping 45 shots.


Game 4 at Toronto saw Doug Favell back in net for the Leafs. Terry O'Reilly opened the scoring with his first career NHL playoff goal before Ron Ellis responded. In the second period, Ken Hodge and Norm Ullman traded goals before Wayne Cashman and Garry Monahan fought. In the third period, the Bruins pressed for the win and broke through with less than three minutes left as Bobby Orr scored his first of the series. Desperate to avoid a sweep, the Leafs fought back with Inge Hammarström scoring his first career NHL playoff goal, sending the game into overtime. It took the Bruins less than two minutes to end the series as Ken Hodge tipped in Carol Vadnais' point shot.

The Maple Leafs were involved in the following transactions during the 1973-74 season. 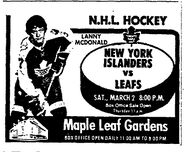 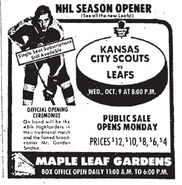 Home opener
Add a photo to this gallery

Retrieved from "https://icehockey.fandom.com/wiki/1973–74_Toronto_Maple_Leafs_season?oldid=722130"
Community content is available under CC-BY-SA unless otherwise noted.