The 1973–74 QMJHL season was the 5th season in the history of the Quebec Major Junior Hockey League. East and west divisions resumed with the addition of two new teams, the Hull Festivals and Chicoutimi Saguenéens. Eleven teams played 70 games each in the schedule, up from the 64 games the previous season.

The season sparked an offensive explosion, unmatched in Canadian Hockey League history. The Sorel Éperviers finished first overall in the regular season, and set a CHL record of 620 goals scored as a team. Three Sorel players, Pierre Larouche, Michel Deziel and Jacques Cossette, had more than 90 goals and 200 points each. Sorel goalkeeper Claude Legris won the top goaltender award, despite posting a 4.50 goals against average; the highest GAA of any Jacques Plante Memorial Trophy winner to date.

Pierre Larouche set a Canadian junior ice hockey record scoring record for most points scored in a season with 251, that lasted until the 1983–84 QMJHL season when broken by Mario Lemieux. Three different players, Mike Bossy, Alain Daigle and Bob Sirois each scored 70 goals or more in the season, yet none were in the top ten league scoring leaders.

The Québec Remparts finished second place in the regular season despite scoring 531 goals as a team, the second highest in CHL history. Quebec won the President's Cup, defeating the first place Sorel Éperviers in the finals.

Jacques Locas was the leading scorer of the playoffs with 51 points (18 goals, 33 assists). 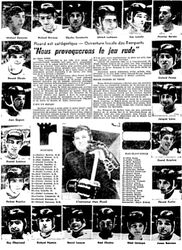 Quebec Remparts
Add a photo to this gallery 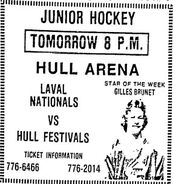 Retrieved from "https://icehockey.fandom.com/wiki/1973%E2%80%9374_QMJHL_season?oldid=409979"
Community content is available under CC-BY-SA unless otherwise noted.