The Flyers would prove that the expansion teams could challenge the Original Six in 1973–74. Bernie Parent returned to the Flyers in a trade with Toronto, which ultimately proved to be the finishing piece of the championship season to come. The Broad Street Bullies would continue their rough-and-tumble ways, led by Dave Schultz's 348 penalty minutes, and they would reach the top of the West Division with a record of 50–16–12. The return of Parent proved to be of great benefit as he established himself as one of if not the best goaltender in the league by winning a record 47 games.

Come playoff time, the Flyers swept the Atlanta Flames in four games in the first round. In the Semi-finals, the Flyers faced the New York Rangers. The home team won ever game in the series with the Flyers prevailing 4 games to 3. In the 1974 Stanley Cup Finals, their opponent, Bobby Orr and the Boston Bruins, took Game 1 in Boston, but Bobby Clarke scored an overtime goal in Game 2 to even the series. The Flyers won Games 3 and 4 at home to take a 3–1 series lead, but Boston won Game 5 to stave off elimination. That set the stage for Game 6 at the Spectrum. The Flyers picked up the lead early when Rick MacLeish scored a first period goal. Late in the game, Orr hauled down Clarke on a breakaway; the penalty assured the Flyers of victory. Time expired as the Flyers brought the Stanley Cup to Philadelphia for the first time. Parent, having shutout Boston in Game 6, won the Conn Smythe Trophy as the Playoff MVP.

The Flyers were involved in the following transactions before/during the 1973–74 season.

Philadelphia's picks at the 1973 NHL Amateur Draft in Montreal, Quebec.[6]

The Flyers were affiliated with the Richmond Robins of the AHL and the San Diego Gulls of the WHL.[7] Rene Drolet led the Robins with 73 points and Richmond finished 4th in their division and lost in five games to the Baltimore Clippers in the first round of the playoffs.[8] San Diego finished 3rd in the 6-team WHL's final season in existence. The Gulls also ceased operations once the New Jersey Knights of the WHA moved to San Diego and became the San Diego Mariners. 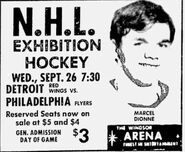 Retrieved from "https://icehockey.fandom.com/wiki/1973–74_Philadelphia_Flyers_season?oldid=716581"
Community content is available under CC-BY-SA unless otherwise noted.