The 1973–74 Houston Aeros season was the 2nd season of the Aeros franchise in the World Hockey Association (WHA). The Aeros finished 1st in the Western Division and defeated the Chicago Cougars 4 games to 0 to win the Avco World Trophy WHA championship.

The Aeros jersey underwent significant changes that would last for the rest of their stint in the WHA. The colours remained the same as in the 1972-73 season but the colour flows on the arms were removed and stripes added. The body stripes were modified, the diagonal "AEROS" font was changed from block to serif and the names on the jersey backs were enlarged but were not outlined.

Gordie Howe was coaxed out of retirement after the Aeros signed his sons Marty and Mark Howe.

At age 45, Gordie Howe scored 100 points during the season, was voted a First Team All-Star and awarded the Gary L. Davidson Award as the league's most valuable player. Two seasons after he won the award, it was renamed to honor his legacy. Mark Howe won the Lou Kaplan Trophy as Rookie of the Year and was voted a Second Team All-Star. Goalie Don McLeod won the Ben Hatskin Trophy as Best Goaltender and was also voted a First Team All-Star.

The Aeros won the Western Division for the first time in their history.

Bill Goldthorpe made his WHA debut in this series, picked up 25 penalty minutes and was ejected from Game 4.

When the Chicago Cougars won their series versus the Toronto Toros, the Peter Pan show had moved on, and the International Amphitheatre should have been available. However, the Amphitheatre had a portable ice surface. For reasons that were never stated, the Amphitheatre staff decided the hockey season was over so uncovered and dismantled the copper pipes used to chill the ice. The Cougars had no choice but to return to the Randhurst Ice Arena, a 2,000 seat public skating rink, for the Finals. The Cougars never quite recovered from the public relations disaster. One sports reporter had quipped, "The Cougars were beaten by the greatest lightweight of them all - Peter Pan." 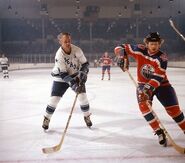 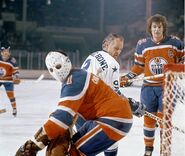 A 19 minute video with highlights from the 1973-74 Houston Aeros season.

Retrieved from "https://icehockey.fandom.com/wiki/1973–74_Houston_Aeros_season?oldid=720932"
Community content is available under CC-BY-SA unless otherwise noted.