The 1972 World Ice Hockey Championships was the 39th edition of the Ice Hockey World Championships. The tournament was held in Prague, Czechoslovakia from April 7 to April 22, 1972, and the Czechoslovakia national team won the tournament, the third time they had done so and first since 1949, ending the Soviet Union's streak of nine consecutive titles.[1] For the first time, a separate tournament is held for both the World Championships and the Winter Olympics. Previously, the Winter Olympics tournament was held in lieu of a world championships, with the winner being declared world champion for that year.[1] It also marked the first time in international ice hockey that all goaltenders were required to wear face masks.[1]

Played in Bucharest from March 24th to April 2nd.

Poland was promoted to Group A, both Norway and France were relegated to Group C. The French team boycotted the tournament in a protest over their federation's failure to finance the team's participation in the Sapporo Olympics[2][3]

Played in Miercurea-Ciuc from March 3rd to the 12th. The Chinese won their first game ever played in a World Championship.[4]

Both Austria and Italy were promoted to Group B. 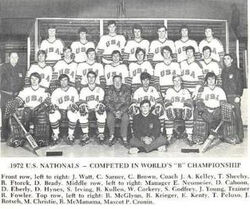 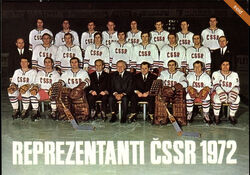