This is the 1972 tournament for the University Cup, the CIAU Canadian university championship. It was held at Sherbrooke, Quebec. Four conference winners played a single elimination tournament. Starting this season, the Ontario teams from the OIAA, OSLC, and QOAA formed the new OUAA and the Quebec teams from the OSLC and QOAA formed the new QUAA. This was also the final season for the WIAA in Western Canada. 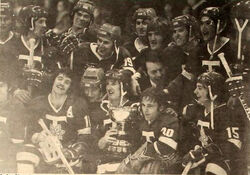 Retrieved from "https://icehockey.fandom.com/wiki/1972_University_Cup?oldid=546994"
Community content is available under CC-BY-SA unless otherwise noted.